This review was originally printed in Reinvention: an International Journal of Undergraduate Research, Volume 6, Issue 1, www.warwick.ac.uk/reinventionjournal/issues/volume6issue1/conwaykilov/ 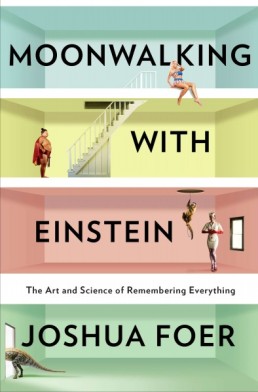 In his captivating book Moonwalking with Einstein Joshua Foer details his journey from journalist to memory master during his research for an article on the US memory championships. Moonwalking with Einstein explores the world of memory, setting out on a journey that takes the reader from the bizarre world of memory sports through the relevant cognitive science and all the way back to Ancient Greece to the birth of mnemonic techniques. This is a popular, rather than scholarly, book, and the historical and scientific details are gleaned from Foer’s journalistic investigations, rather than original research.

There was a time, Foer reflects, when it was more practical to remember information than it was to record it. In ancient times, recording information was a lengthy and expensive process. Consequently, students in the ancient world were taught, ‘not just what to remember, but how to remember it’ (p. 96) using mnemonic techniques referred to collectively as the Art of Memory. The techniques of the Art of Memory all revolve around the composition of elaborate and colourful mental images. In one instance, for example, Foer memorises a shopping list by conjuring mental images of Claudia Schiffer swimming in cottage cheese and anthropomorphic bottles of wine getting into a punch-up.

During the Middle Ages, books were not considered substitutes for memorisation but rather as aides-memoire. Books of this period were written without punctuation or spacing, in an unending stream known as scripto continua (p. 139). Without punctuation or paragraphs, page numbers or an index, referring to a work written in scripto continua required an intimate knowledge of the text. As Foer puts it, these works existed ‘not to hold its contents externally, but rather to help its reader navigate its contents internally’ (p. 141). By the time of the Enlightenment, improvements in technologies designed to externalise memory resulted in a decline in the popularity and practice of mnemonic techniques.

Even during the Enlightenment the idea of using memory techniques to preserve information was beginning to appear outdated; how much more so now in the age of smartphones and smarter search engines? Foer explores the idea that we might be ‘moving toward a future, it seems, in which we will have all-encompassing external memories’ (p. 155) by introducing us to an engineer named Gordon Bell, who has taken to recording everything he does via a miniature camera he designed to act as a surrogate memory. Bell can search through his recorded ‘memories’ using customised software to ‘recall’ particular details which are all downloaded and stored on his computer.

Bell’s internal and external memories do not yet interface seamlessly; his external memory does not allow for the same speed and ease of recall as his biological memory, yet his project raises crucial questions about the role and nature of our memories. It is these questions that motivate Moonwalking with Einstein.

Given that it is so easy to relegate so many of our memory tasks to external devices, what is the point of remembering anything? For a person who has invested hundreds of hours in developing his memory (by the end of his journey, Foer is capable of memorising a deck of shuffled playing cards in one minute and forty seconds) Foer’s answer is a surprising one.

Foer’s answer as to why we ought to train our biological memories rather than rely on external systems is not, as one might expect, inspired by any of the prodigious memorisers he introduces us to in the course of his book. Instead, His most compelling argument is one he ‘received unwittingly from EP’, an amnesiac who is entirely unable to form new memories and ‘whose memory had been so completely lost that he could not place himself in time or space, or relative to other people’ (p. 268). Without his memory, Foer writes, ‘EP has fallen out of time. He has no stream of consciousness, just droplets that immediately evaporate’ (p. 74).

For Foer, to be human is to remember. Our memories are not perfect reproductions of past events that we pull up like files on a computer when we need them. Rather, our perception of the world is constantly coloured by the things we think, believe and know, all of which resides in our memories. There is no clear line between remembering and creating. Cultivating a better memory is not (or not merely) about storage or efficiency: in these respects, external recording technologies are either already superior to our biological memories or might be so one day soon. Our ability to notice connections between previously unconnected ideas, to find humour in the world and to share in a common culture are all essentially human acts that depend on memory (p. 269).

Foer deals a blow to the fantasy of cultivating a faultless memory (a fantasy which motivated his entry into the world of memory sports) but does so with such sensitivity and enthusiasm for his topic that one comes away feeling inspired rather than disillusioned. His argument that memory is the seat of identity is compelling, but does not, on its own, clearly justify the training of memory. Foer’s experiences, however, provide another argument for practising the ancient techniques of the Art of Memory: memory training is fun. The mental images that Foer and his fellow mnemonists create are playful and the process of remembering is as much an exercise in creativity as it is in fidelity. The final lesson of Moonwalking is that we ought to approach our memories with a sense of playfulness, because that is how they work best.